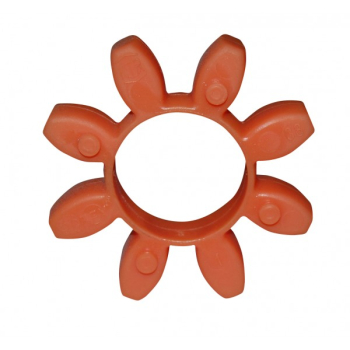 The Habix Stern Optibelt flexible element is available in white color with a hardness of 92 Shore A (Rotex equivalent colours are yellow and orange) and in red color with a hardness of 98 Shore A (Rotex equivalent colour is Lilac). It is resistant against wear as well as against oil, ozone and ageing. The flexible of the couplings absorbes efficiently shockloads, torsional vibrations and noises. The flexible element of the couplings has been designed to compensate radial, axial and angular movements between the coupling halves. By the fixed position of the flexible element its deformability in axial direction is free and no harmful axial forces may disturb the machine bearing even with changing torques. The flexible element of the Habix® coup-ling allows a permanent thermal load up to 80 °C. Even low temperatures up to –20 °C are allowed. The flexible Habix® coupling can easily be connected and does not require a high accuracy of the shaft alignment.