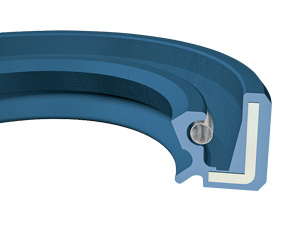 Used preferably in pressurised units. Reliable sealing of the housing bore, even with increased roughness of the bore, thermal expansion and split housings. Advantages when sealing low viscosity and gaseous media. Pressure seals, such as the BABSL, can be used in many applications including pumps and motors in hydro-units, mechanical power transmission gearboxes, and 2-stroke engines. However in conventional seal designs, as pressure increases the seal life dramatically decreases due to a typical seal wear that is caused by pressure distortion of the seal lip geometry and increased friction at the contact point. The BABSL minimizes those problems over a wide range of operating conditions.

There are no downloads for this product.